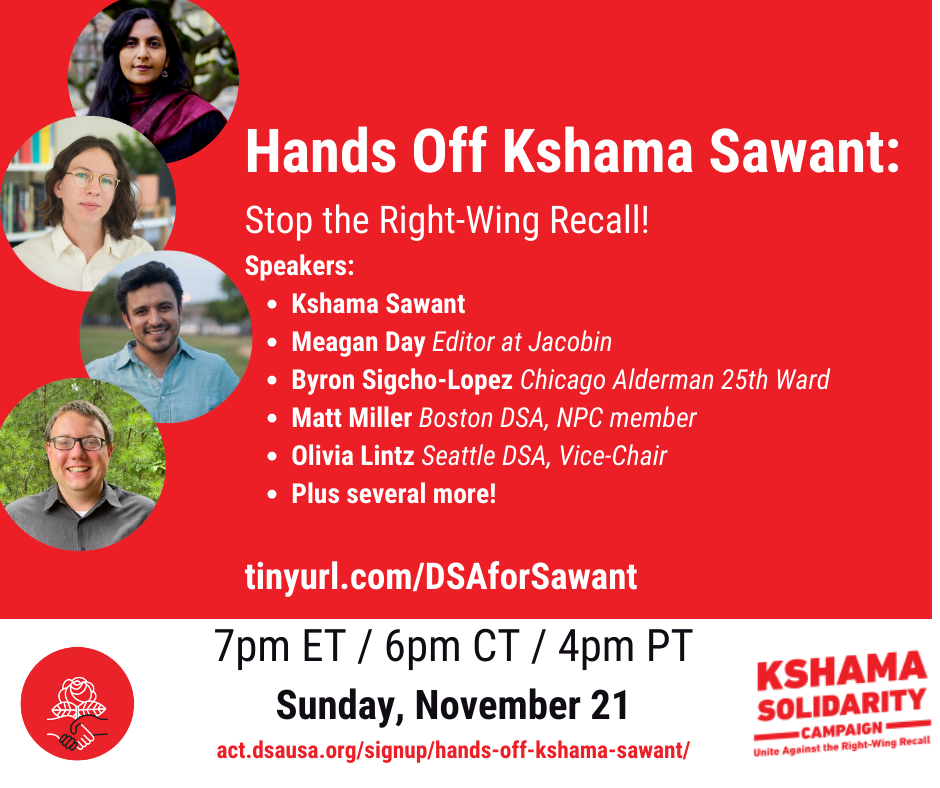 SPEAKERS:
* Kshama Sawant
* Byron Sigcho-Lopez (Chicago Alderman 25th Ward)
* Meagan Day (Staff Writer at Jacobin, Co-Author, “Bigger than Bernie”)
* Matt Miller (Boston DSA, National Political Committee member)
* Olivia Lintz (Vice-Chair, Seattle DSA)
* Laura Gabby (Union Carpenter, National Political Committee and DSLC member)
* More TBA!
DSA Stands with Kshama Sawant!
For eight years Kshama Sawant has used her position as an independent socialist Seattle City Councilmember to build movements and win major victories for the working class, from the first $15 minimum wage in a major city, to the $250 mil/year Amazon Tax, to first-in-the-nation renters’ rights victories. Now, she and our movement are facing down a right-wing Recall campaign with a low-turnout holiday “special election” on December 7th.
If the Recall succeeds, it will set a dangerous precedent that whenever socialist elected officials prove themselves to be incorruptible fighters for working people and against racism, they can simply be removed via undemocratic “special elections,” voter suppression, or as we recently saw in Buffalo, corporate-backed write-in campaigns. It’s no accident that two out of the Recall’s three “charges” relate to Kshama’s role in Black Lives Matter last summer, part of a national right-wing backlash against the BLM movement. This anti-BLM, anti-socialist Recall is a warning to socialist representatives everywhere and must be opposed with the full strength of our movement.
Join the DSA’s National Electoral Committee and the Kshama Solidarity Campaign for this important rally and fundraiser, and to hear about what you can do to defeat the Recall and #KeepKshama!