Rally to Defend Reproductive Rights / No to TX Abortion Ban! 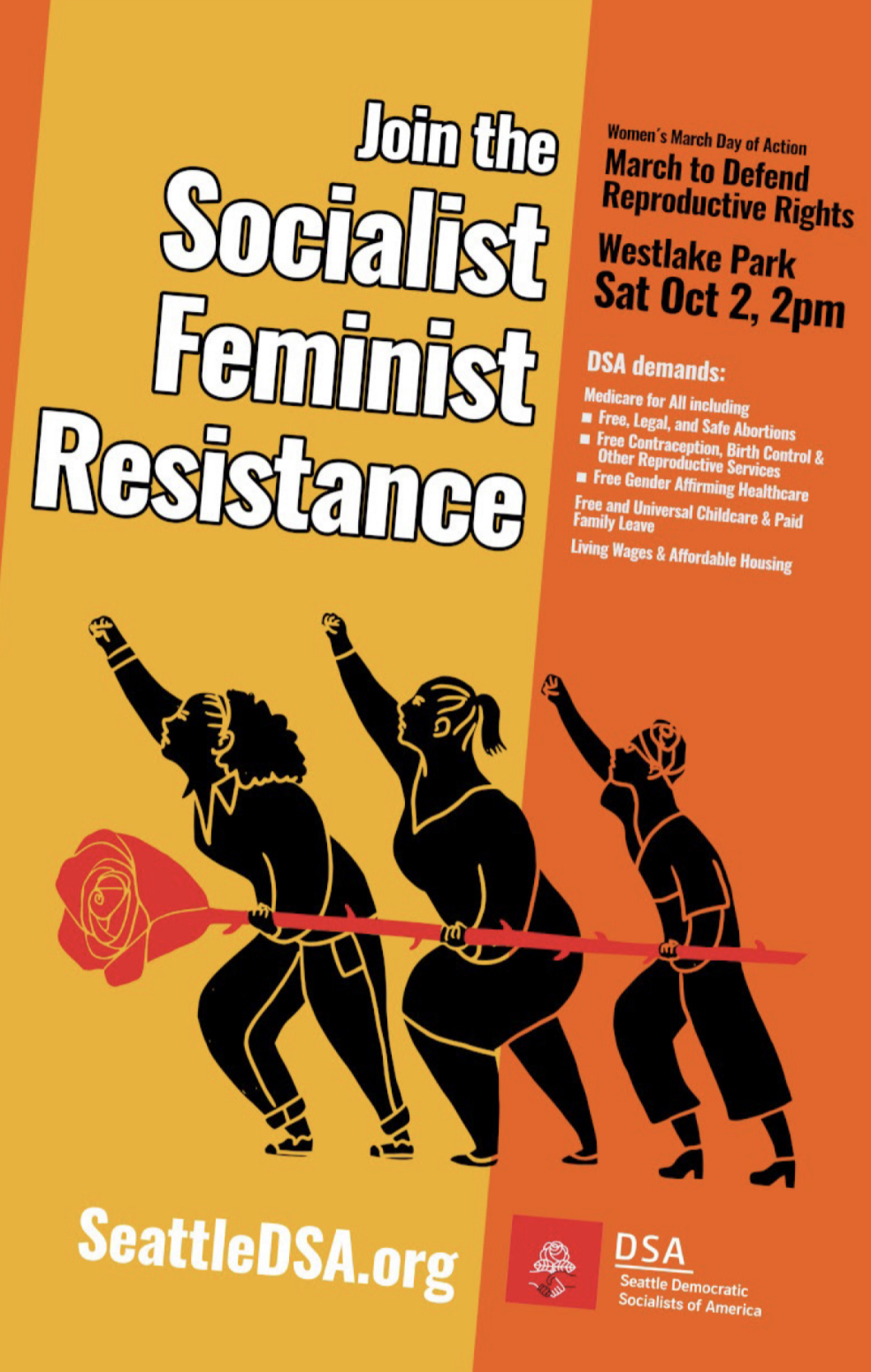 The Texas abortion ban is an unprecedented and draconian atttack on reproductive autonomy that outlaws abortions after six weeks and creates a bounty on those who “aid and abet”, effectively overturning Roe v Wade for millions in the state. In response, the 2017 National Women’s March organizers and more than 90 organizations have called for cities across the country, including Seattle, to participate in a National Day of Action to defend reproductive rights. Join your comrades at a rally to support reproductive rights on Saturday, October 2, at 2pm at Westlake Park.

This national day of action is happening just before the Supreme Court is set to deliberate on the Mississippi “heartbeat” law that would outlaw abortion after 15 weeks. Despite broad support for Roe v Wade, with nearly 60% of Americans supporting abortion in most or all cases, the Supreme Court is sending a clear message that they will not defend reproductive rights. Already, GOP dominated State legislatures, encouraged by this recent judicial ruling, are vowing to follow Texas’ lead and introduce their own copy-cat laws that will extend to other aspects of reproductive rights, including anti-Transgender bills. As socialists, we know that this struggle is also a class issue. The Texas law disproportionately impacts the poorest and most oppressed sections of the working class, people of color, immigrants, and Black people – all of who make up 70% of people seeking abortions.

We cannot rely on the Democratic Party to consistently defend reproductive rights. In 2007, Obama said to Planned Parenthood: “The first thing I’d do, as president, is sign the Freedom of Choice Act. That’s the first thing that I’d do.” This would have codified Roe vs Wade into law but even with a Democrat majority in 2009-10 they never brought it to a vote. Democrats could codify Roe as well as pack the Supreme Court today but they won’t unless intense pressure is brought to bear.

How can we fight the Right’s attacks?

Mass action is what’s needed to meet these attacks on reproductive rights. Collective mass action was the main reason we won Roe v Wade in the first place and it’s the main way to beat back attacks and advance reproductive rights now. Strong marches in 1989 and 1994 of 1 million and 500,000 respectively in Washington DC led to the US Supreme Court not only backing off curtailing Roe V Wade, but to reaffirming the right in an important precedent setting ruling in Planned Parenthood v Casey.

A strong enough mass movement can stay the hand of the right wing who want to overturn Roe v Wade. The October 2nd protest and others that will likely follow in the months ahead can lay the foundation for a mass movement that has more far reaching socialist feminist demands, including Medicare for All, Free and Universal Childcare, and Living Wages and Affordable Housing (see the attached poster).