In an April 22 column, Seattle Times’ Danny Westneat mused on qualifications of mayoral candidates, specifically criticizing Mayor Ed Murray’s most prominent challenger at the time, Nikkita Oliver. Westneat suggested that a gap-filled voting record (or, as he put it, her lack of “[participation] in the bedrock democratic process of voting”) was indicative of her as a candidate who lacked a capacity or interest for the “top political job” in the city.

Oliver responded that she was “a reflection of the underrepresented, vulnerable and marginalized communities who are often disenfranchised from voting by institutional and systemic barriers.” This scrutinizing of Oliver’s voting record upon seeking office will not be lost on anyone who’s had to apply for a job with gaps in employment on their résumé. An employer’s imagination reels with disqualifying factors upon seeing such voids: a lack of motivation, inability to work with others, insubordination, incarceration, a prejudice that such a perceived, deleterious lack of engagement will occur again.

What should voters infer, then, from the work experience of Chamber of Commerce favorite Jenny Durkan? A federal attorney who targeted May Day protesters and raided cannabis stores? Whose law firm has represented Shell in a drilling case, Uber in a consumer protection suit and McDonald’s for labor violations? 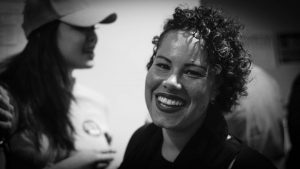 Nikkita Oliver’s experience is perhaps more emblematic of the Seattle where most of us live and work, a Seattle where homelessness has spiked, Amazon shares have hit $1,000 each and landlords are suing to remove capped tenant move-in fees. Oliver juggles multiple jobs, teaching middle school part-time and managing cases at non-profit Creative Justice while still finding time to volunteer her services pro bono as a lawyer as well as writing and performing her own verse. Look at Oliver’s experience; does she know what living in this city is like for residents? Does she interact with working people outside of caterers at fundraisers? Does she know the crushing feeling of landlord evictions via rent increases? Does she know what it’s like trying to live in this city on minimum wage? Does she know what it’s like to have to take public transit to get places? Does show know what it’s like to work full-time, attend school and still be homeless, except for the shelter provided by a car? Oliver does.

This is a pivotal time for the left in the country at large and for our city in particular. Seattle is headed fast toward becoming the next San Francisco; an economic engine of undreamt-of abundance for few at the expense and exploitation of many. Oliver has said, ”In a lot of ways, this is our last chance. If we waited four more years to get progressive folks in action, none of us would live here anymore.” The opportunity to coalesce around an independent left in Seattle must be seized. Seattle Democratic Socialists of America is proud to have voted to join our brothers and sisters in Socialist Alternative, Seattle International Socialist Organization and the Green Party to endorse Nikkita Oliver for mayor in 2017.

Read more about Oliver and the Peoples Party or volunteer for the campaign here.

One comment on “Seattle DSA Endorses Nikkita Oliver for Mayor”