Even wars for survival, or against fundamental injustice, are tragedies borne out of the aggression or cruelty that preceded it. War is always a failure of one or more parties to understand others, wherein one another are treated as tools to be wielded for respective gain.

The United States is in its second decade of George W. Bush’s “war on terror,” with continuous fighting in Afghanistan and Iraq. The tragedy of 9/11 was a political blank check, and the US military continues to use it to create more tragedies in a never-ending cycle of retribution and revenge.  During all of this, capitalism fuels its engine on plunder and destruction.

The Iraq War was sold as a war that would pay for itself— Iraq’s oil reserves would be ours, after we installed a government friendly to Western business. Even today, some push to stay in Afghanistan in order to exploit the country’s rich mineral reserves.  When capitalists are faced with the fundamental impossibility of permanent growth, they fake it through destruction. War enriches private military contractors, destroys nations so that corporations can expand their wealth by rebuilding them, and allows for exploitation of natural resources. Business-friendly politicians receive their share of the plunder through donations and kickbacks from benefiting corporations.

Now, there are calls to include North Korea in the scope of global conflict, and for the United States to get even more deeply involved in the Syrian conflict.  Many want you to believe that the US is being forced into these conflicts, completely unknowingly, an issue well covered in this article. For example, CNN is already building the case for war: 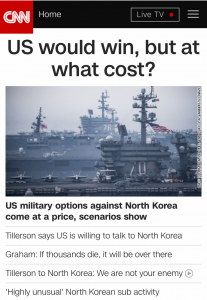 When you see that war is being marketed to you, it’s important to consider: what does “winning” even mean? For example, we blame Assad for killing people in Syria, so to stop him, should we should kill Syrians instead? North Korea may be creating an intercontinental ballistic missile capable of hitting the mainland United States, so should the US should preemptively nuke them instead? Nuclear weapons and state terror are unacceptable, unless, of course, you are the biggest force of global capitalism in the world. Never believe that the life of a North Korean is worth less than that of an American– after all, aren’t both of our governments headed by unstable militaristic narcissists?

Socialists must oppose the idea that the value of your life is incumbent on where you’re born. We should be forever skeptical of those who call a war “necessary,” knowing how much money there is in making them appear so. The global proletariat must stand united against those that would exploit and destroy them in their pursuit of power and capital, and demand accountability and justice for the wars we cannot stop.  A socialist world without want or injustice is necessarily without war; until we live in that world, we must fight for peace.