We have until August 11th to finish gathering 10,000 signatures to get social housing on the ballot! Support SDSA's priority campaign for House Our Neighbors and sign up for a signature collection shift HERE

By John Smith and Chuck McKeever, with editing by Seattle DSA Communications team

In the empty spaces beside the low-traffic surface road under the Alaskan Way Viaduct, a few small groups of tents were home for people who had nowhere else to go.  Despite the loud traffic noise , the viaduct would provide cover from the coming fall rain.

In stark contrast to these living conditions, a vintage guitar store nearby makes its name selling instruments worth hundreds of thousands of dollars.  It recently bought out a leftist bookstore next door in order to better serve the wealthy.

Across the street, under the viaduct, the City of Seattle posted notices that the people living under the viaduct would have to leave, forcing them from what little shelter and stability they had achieved.

On Sunday, the day before the city was planning to sweep them, I went to talk to the people who were living there.  Everyone I met was willing to share pieces of their stories and how they were feeling.  This piece is for them.

The first man I spoke to, whose name I did not get, said that he had recently become homeless.  He’d come to Seattle from Spokane for medical treatment, but had to leave the treatment center when it turned out to not be what was promised, leaving him without anywhere else to go.  He wasn’t concerned about the coming sweep as he was with just trying to find a way to get enough money to be able to get back to his girlfriend and 6-month-old son in Spokane. As we talked, he finished spray-painting a sign, told me that they called it “flying our flag,” and went to go see if he could raise the money near a busier intersection.

At another group of tents, I was directed by one person to speak to Memphis, an older man who seemed to be in a position of leadership in this group.  He said they hadn’t been at this location for very long, but he seemed to be getting everything ready for the coming move.  He had been swept before and said that they city never provided any services or help – officials just told them to move along.  He had come to Seattle to work but now regretted ever coming.  Tired and resigned to the impending move, he shook my hand and got back to his tasks.

The last people I talked to were a young couple: Manny and Emily. They were getting ready for the sweep, planning to move down to the Jungle, though Manny commented on how dangerous that would be before trailing off.   While we talked, Manny was scratching off lottery tickets, since  “anyone could be a winner” and get out of homelessness in Seattle.

I told Emily about Housing For All, and after considering it for a moment, she agreed that it was a good idea. She explained that she was a drug addict and wasn’t looking for any moralizations because she had her reasons for using. Whatever those reasons were, Emily’s story makes it clear why “housing first” is so important; you cannot leave someone in a bad situation and demand they meet your standards before you offer them any stability.

The next day the city came as planned, with police and city officials watching over to make sure that the people left.  Two Seattle DSA members made it there to observe, help pack things up, as well as fix a flat tire on a U-Haul that a friend had rented for the residents. They fed and talked to the residents of the encampment and only one resident indicated they had somewhere else to go; the rest of the residents that the DSA members spoke to had no idea where they’d end up next, despite the city’s claim that they will provide alternatives prior to and on the day of the sweep (Encampment Rule 7.0). Is a city worker’s suggestion that an encampment resident pack up and move to a different cluster of tents really a compelling alternative?

It is clear that the city’s priorities lie not with mitigating the traumas of poverty or the protection of our most vulnerable residents, but with protecting property and capital. The residents obstructed no traffic, and neither posed nor were immediately threatened by any hazard; they even kept the bike lane that bordered their temporary home clear using a push broom. The only clear reason for the city to sweep this particular encampment appears to be its proximity to a rapidly-gentrifying downtown area, which now boasts a vintage baseball clothing store, trendy dive bars and boutique coffee shops lining the block just east of the encampment. 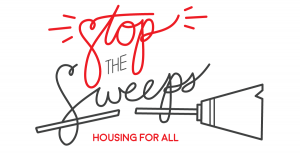 Only left politics can build a future that enables all to live dignified lives free from the violence of poverty.

It’s worth noting that the city doesn’t need to specify to the residents or to the public the logic behind any particular sweep, only that it has happened or will happen, and what they confiscated from the residents there. Interim Mayor Tim Burgess’ new budget allocates more money to carrying out sweeps, but we won’t hold our breath waiting for transparency to go along with it.

While they carried the sum total of a man’s possessions to storage in two garbage bags, the DSA members passed by another Seattle resident who was also getting ready to move: mayoral candidate Jenny Durkan, who is moving from her downtown condo to a 7.5 million dollar house.  She strode by, seemingly carefree, a living representation of the failed neoliberal capitalist politics that cause people like Spokane, Memphis, Manny and Emily to end up homeless and stuck in a cycle of forced relocation with no real support.

Our day-to-day interventions cannot solve this crisis. Only left politics—a politics that believes housing is a human right and should not be left to the whims of capital—can build a future that enables all to live dignified lives free from the violence of poverty.

6 comments on “Sweeping People Away: How Seattle’s homeless sweeps do more harm than good”