On May 31, the Seattle City Council will convene to take what could be a historic step toward correcting the most regressive state tax structure in the country.

Councilmembers will meet to discuss a resolution to enact a Seattle income tax and develop a plan to pass legislation by July 10. It’s far from just a symbolic gesture, and the public hearing has real power to right our state’s broken tax code, which hits the poor and working class the hardest while effectively providing a “tax-haven” for the rich.

In Washington, the richer you are, the less tax you pay. Folks, it ain't gotta be this way. #TrumpProofSeattle @SeattleTRU pic.twitter.com/RR1dlc7XsG

And make no mistake; city officials would like you to think this is their idea, but this income tax plan is the result of a monthslong, sustained grassroots campaigning effort by the Seattle Transit Riders Union (TRU).

Billed as “Trump-Proof Seattle,” the tax proposed by TRU seeks to levy a 1.5 percent tax on income in excess of $250,000 per year. The group says only a small percentage of Seattle households fall into this category.

TRU led to charge to organize and educate Seattle residents about the need for a Seattle income tax on the wealthiest households, which they say could raise $175 million per year to fund critical needs such as ensuring affordable housing for all residents, equal access to education, and meeting Seattle’s carbon reduction goals.

The #TrumpProofSeattle campaign's proposal. The tax doesn't apply to you if you make less than $250k. ??? @SeattleTRU pic.twitter.com/u8OpiIk2vO

While they certainly weren’t the first group to tackle Washington’s thorny relationship with income taxation, their use of boots-on-the-ground grassroots campaigning and coalition building resulted in huge, measurable gains in the fight for a more fair and equitable tax system. Along with support from dozens of organizations — which include the Seattle chapter of the Democratic Socialists of America, Socialist Alternative, 350 Seattle, PSARA, the Neighborhood Action Coalition, SHARE / WHEEL and Nickelsville residents — TRU organized town halls in all seven Seattle City Council district and invited representatives from each district to hear from constituents.

The TRU itself is almost entirely volunteer-run, and the town halls were made possible by dozens of people affiliated with coalition organizations who contributed hundreds of hours to plastering poster around the city, tabling and doing community outreach, running the town hall events, and handling logistic and data-entry work. 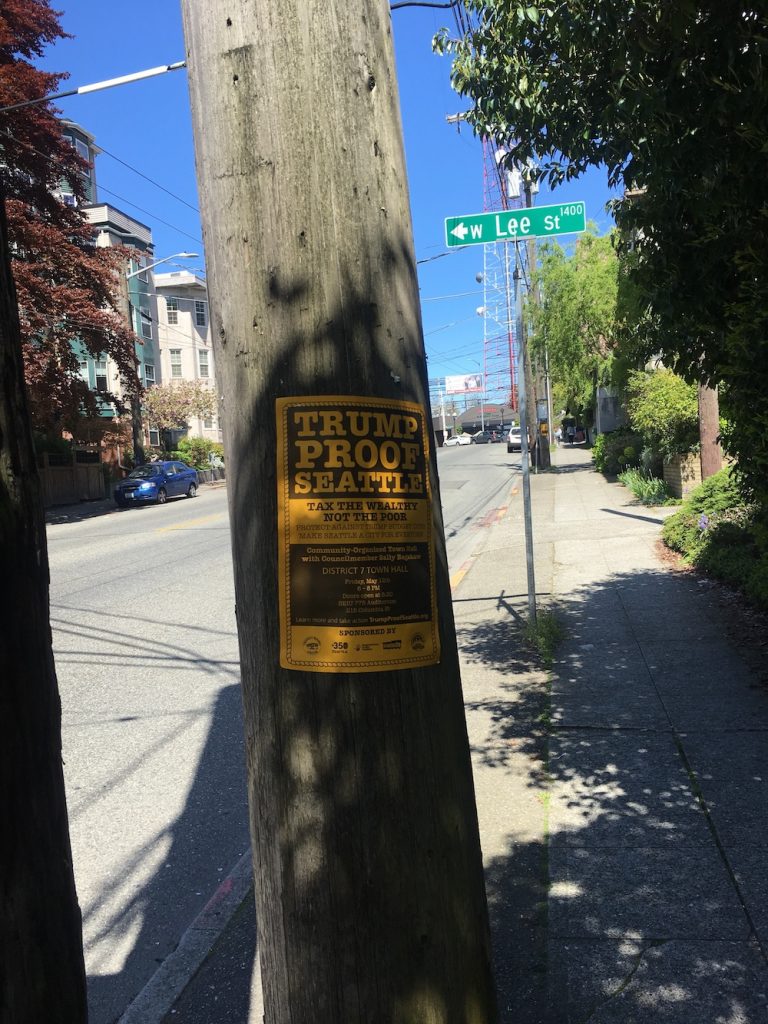 A poster on a Queen Anne light pole advertising a Trump-Proof Seattle town hall event. The town hall events were made possible in part by volunteers from the Transit Riders Union and dozens of other organizations that spent time plastering the city’s light poles with signage. Photo courtesy of Seattle DSA.

Excitement, or at least interest, in an income tax seemed evident from the onset of the town halls. The first was held March 24 with District 4 representative Rob Johnson, who told the crowd of around 150 people gathered at University Heights Center, “With your support, we’re going to get this done.”

Of the seven districts, only Sally Bagshaw, Pos. 7, failed to show. At-large councilmembers Tim Burgess, Pos. 8, and Lorena González, Pos. 9, also failed to attend meetings. Councilmember Bagshaw has indicated to The Stranger she’s noncommittal on the proposal, while councilmember González has said in vague terms that the resolution is a “pragmatic and solution oriented path for Seattle residents …to strategically call to question the regressive nature of our tax system.” Seattle Weekly has described Burgess as “enthusiastic about the prospect of a city income tax.”

But despite councilmembers who are slow to warm to the idea, the town halls have had an undeniable impact on the political discourse in the city. The income tax has suddenly become a key issue in the contentious race for at-large city council positions 8 and 9, as well as a highly-competitive mayoral race.

READ MORE: City Council and mayoral candidates respond to questions about the proposed Seattle income tax and the youth jail

During an April debate for candidates, even Mayor Murray came out in support for a tax on “high-end” households. Although Murray has since dropped out of the mayoral race following claims he sexually abused underage teens in the 1980s, repairing Washington’s regressive tax system is on the forefront of the minds of those running for public office as a result of grassroots efforts and organizing.

From left to right: Mayoral candidates Mike McGinn, Nikkita Oliver, Jason Roberts, Alex Tsimerman, Cary Moon, Ed Murray and Mary Martin. Only Cary Moon said she would not support an income tax. Mayor Murray has since dropped out of the race.

"Do you support a Seattle income tax as a test case to go to the state supreme court?" pic.twitter.com/0eBhsmyLYU

“In just a few months, city elected officials went from skepticism to unanimous public support for a Seattle progressive income tax. That happened because people organized,” Katie Wilson, TRU general secretary, told Seattle DSA. “Grassroots organizations and hundreds of volunteers spanning every district of the city built a movement for tax justice that the Councilmembers and Mayor could not afford to ignore.”

"Do you support an income tax as a test case for the state supreme court?" pic.twitter.com/ZbaBOCtUGx

While the May 31 City Council meeting is a big step in the right direction, the battle is far from over. An income tax is constitutionally illegal in Washington, and TRU expects the measure to be challenged immediately in the state supreme court. The legal battle could drag on for years, and it’s difficult to say when exactly the city would start seeing revenue from the tax in the event it clears legal hurdles.

Nay-sayers have cropped up too. In a May 26 editorial published in the Seattle Times, former attorney general Rob McKenna and retired state supreme court justice Gary Alexander wrote “this proposed measure ultimately will fail” because the supreme court has historically ruled similar efforts illegal.

The thing opponents might fail to see, however, is that hard-won social progress and lasting change has always faced monumental barriers, and those most-affected have always led the charge. “Throughout the history of the United States, there are many unjust court rulings that have been overturned,” said KJ Moon, TRU organizer and Seattle DSA member, citing Brown v. Board of Education as just one example. “I have no doubt that the Supreme Court of Washington [will side with TRU’s proposal].”

Wilson and other organizers are well-aware of the long road ahead, and she made group’s intent clear when she told a packed house at the District 3 town hall, “This is perhaps the work of one or two generations. We’re in it for the long haul.”

Q: How can we influence @SeattleCouncil members who aren't 100% on board with #TrumpProofSeattle? A: KEEP ? SHOWING ? UP ? KEEP ? ORGANIZING

If — and when — the income tax becomes law, the coalition will have succeeded where others have repeatedly tried and failed to correct a tax system that hits the poor and working-class the hardest.

“We will make Washington state history,” Moon said. “It’s a testament that progress is made by everyday working-class people who band together to take change into their own hands.”

Hey @SeattleCouncil ? Look at all these people who packed Washington Hall to support an income tax. We won't give up. #TrumpProofSeattle pic.twitter.com/eZNbMDaEgH

5 comments on “A Seattle income tax is possible: Here’s how the Transit Riders Union made it happen”

How do we change society? The Communist Manifesto: District 5