In August 2016, a group of small business owners staged a press conference at Molly Moon’s on Capitol Hill to support I-1433, a ballot initiative raising the Washington state minimum wage to $13.50 by 2020. Molly Moon Neitzel and others spoke in support of the idea, claiming an increase in business after Seattle’s minimum wage hike.

Given this, you might think that Neitzel considers herself a benevolent capitalist who wants to better the lives of ordinary working people. Although this is certainly possible, a minimum wage increase reinforces the very system that produces the inequalities “compassionate” capitalists purport to disdain, and so they still benefit from the initiative. 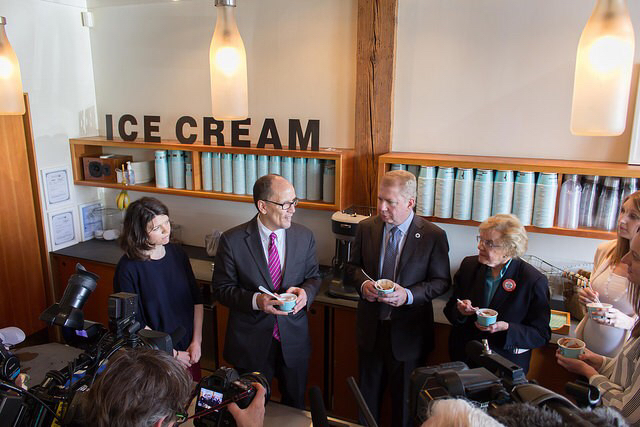 To understand how a minimum wage hike strengthens the position of capitalists, look to the New Deal, and in particular to the policies of one of President Roosevelt’s challengers to the left, Minnesota governor Floyd Olson. Olson won massive popular support from Minnesota farmers by declaring he was “not a liberal, I am what I want to be — I am a radical… What is the ultimate we are seeking? The ultimate is a Cooperative Commonwealth.”

The popularity of this rhetoric frightened business interests at the time, who now had to ward off a potential workers’ revolt. When faced with the choice between Olson’s plans for radical redistribution and Roosevelt’s reformist capitalism, business chose the New Deal without hesitation, as it was their only hope for survival. The Democratic party capitulated, and Olson and fellow populist Huey Long were dead by 1940, taking their momentum with them. Stanford history professor Barton J. Bernstein later wrote that these reforms “did not transform the American system; they conserved and protected American corporate capitalism.”

Genuine leftist policy remained a non-starter in Washington state until 2013. Because wages haven’t kept pace with productivity, and affordable housing is becoming alarmingly scarce at all income levels, citizens of Seattle and surrounding areas are more receptive to the left’s politics of redistribution. Groups like the Transit Riders Union are successfully organizing; Socialist Alternative councilmember Kshama Sawant calls for nationalization and increased worker control over Boeing and other large Washington corporations in public speeches. The message is loud and clear: the working class does not have enough, and they are willing to fight for what they deserve.

Understandably, Seattle’s business class is as fearful as they were during Roosevelt’s time, leading them to suddenly embrace progressive policies that would have been unthinkable a decade ago: an income tax, limits on move-in fees, and other reforms have unanimously passed a city council still dominated by corporate interests (Neitzel, for example, told Geekwire she supports the new Seattle income tax).

It is in this political context that Neitzel’s strong support of a higher minimum wage makes sense– when the working class is poor, leftist voices can incite the same popular support for anti-capitalist policies that frightened business owners into supporting the New Deal and the bankers of New York City during the Great Depression. The “benevolent” business owners of Seattle and the industry tycoons of the 1930s understand the same concept.

As Seattle socialists, we should celebrate that our specter provides enough haunt that victories for the working class are supported by the propertied. Nevertheless, we must not mistake this support as anything more than desperation. With $7.9 million in expected revenues for 2017, Molly Moon Neitzel will not struggle to provide her employees with a higher minimum wage. However, she will struggle when her workers seek to expropriate her business and transform it into a co-operative.

We must not capitulate like the New Deal Democrats. We must press on.

One comment on “Who Really Benefits From Benevolent Business?”