By Chuck McKeever and David

Editor’s note: Content warning for assault and mention of suicide.

On Thursday evening, an orange notice was placed on the windshield of one of the lived-in RVs occupying the parking lot adjacent to the Beacon Hill Veterans Affairs office. The notice, written by an officer A. Streb, informed the owner of the RV that his vehicle needed to be gone by 6:40 pm on October 15th. 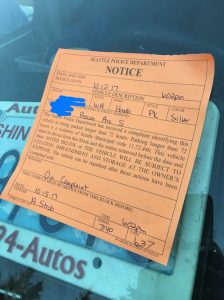 The notice that was left on one of the RVs. The RVs are parked next to the Beacon Hill Veterans Affairs office. Photo courtesy of Stop the Sweeps Seattle.

It was a single threat, but it was a warning to all of the unhoused living in the parking lot, most of whom are U.S. military veterans: You stay here at the leisure of the city, and we will displace you whenever we see fit.

Sweeping People Away: How Seattle’s homeless sweeps do more harm than good

For many of the residents of the RV block, this is the most stable situation they’ve known since becoming unhoused. One, a Vietnam veteran, has lived in that spot for the last 11 years. He spoke to Seattle DSA members and others that he was initially rejected by the Army due to language barriers, but after his speaking improved, he was drafted. He’s by far the longest-tenured resident of the block; the rest have lived here from a few months to a few years.

Their choice of location was no accident. They’re a stone’s throw from Regional Veteran’s Administration Hospital, where they pick up their benefits—just over $120 per month for most of them, including a recent cost-of-living adjustment of 42 cents—and can find bathroom access after dark.

But being a fixture of the neighborhood wasn’t enough to prevent the residents from being threatened by an enforced sweep of their living quarters. A complaint from someone in the area (who, statistically, is unlikely to have lived there as long as some of the veterans in danger of being moved) was the impetus behind Officer Streb’s notice, but the most that city homelessness czar George Scarola could offer was that the nature of the complaint was being “investigated.”

In other words: after a complaint was made, a notice of impending removal was given before meaningful attempts were made to determine its validity in the first place.

A community-led effort, with input from the Housing for All coalition, the Transit Riders Union, Seattle DSA, the YWCA, Socialist Alternative, and others, made enough noise to prevent this particular sweep from happening. What was initially shaping up to be an ugly standoff with police turned into a rally in support of the veterans and all the unhoused of Seattle. Community members chipped in blankets, gloves, hats, jackets, and food on-site.

That such a force can be mustered in under 72 hours is a blessing. But the threat of forced removal, as these residents faced, is one more way that the city completely dehumanizes and traumatizes its most vulnerable population.

To wit: organizers spent a good deal of time speaking with Brandy, an army vet who currently camps nearby (she has no RV). Brandy has been kicked out of multiple public housing projects for cooking with cannabis, as CBD products are the only things she’s found that make a dent in the combined pain of her fibromyalgia, epilepsy, and PTSD. In her time on the streets she has suffered eight beatings at the hands of police departments across the country. She told us that one officer even had the gall to restrain her, then show her his own VA identification card after she told him she was a veteran. Brandy’s treatment at the hands of police was a vicious mirroring of her own experience in the Army, where she was raped by her sergeant at a base in Alaska.

“We can serve and defend this country, but it’s illegal for us to lay on the fucking ground,” she said. “I wake up most mornings and I don’t want to exist. I just don’t have the balls to kill myself.”

All of our bureaucratic processes surrounding caring for the unhoused (a term they prefer to “homeless”) necessarily strip away everything real and raw and visceral and replace them with buzzwords and statistics. The city’s documents and action plans make no concession to the brutal indignity of a life spent in search of a bathroom, nor do they offer any recompense for the current or formerly unhoused whose misery has been compounded by our judiciary’s labeling of them as sex offenders for the “crime” of going in public when no other bathroom was available. 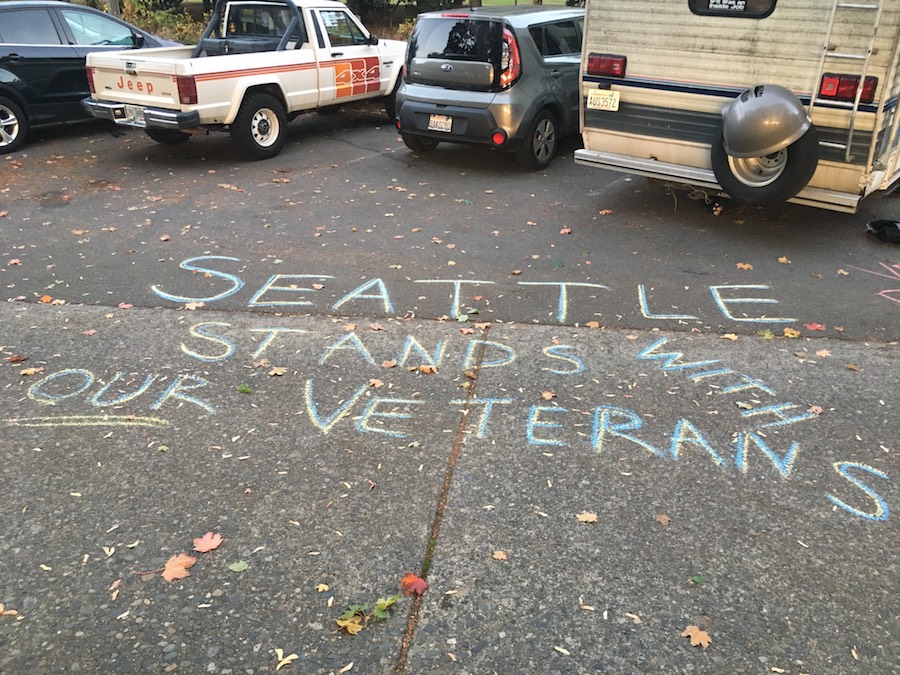 A group gathered on October 15 to stop a sweep of unhoused veterans who have parked their RVs on Beacon Hill. The parking lot is adjacent to the Beacon Hill VA office. Photo courtesy of Stop the Sweeps Seattle.

“There are god knows how many port-a-potties in this city, most of them never in use, every single one of them with a lock on the door,” Brandy told those gathered, including Scarola. “What kind of world is it when people get to decide who gets to use the bathroom and who doesn’t?”

Brandy and her fellow unhoused Seattlites have no guarantee that they’ll be allowed to continue to live where they live next week, next month, or next year. The city’s policies in the aftermath of the homelessness state of emergency declaration in 2015 have met a fraction of the population’s need and doubled down on the brutality and dehumanization that come with forcible removals.

Rapid re-housing vouchers only delay the inevitable for these folks while funneling profit to landlords. Sweeps compound the trauma of life on the street. We need real solutions from a city government that is unafraid to stand up to the donor class, and a government that should be pursuing equity and justice for the people who have suffered while others have profited during Seattle’s prosperous boom.

Looking for a way to help the Stop the Sweeps campaign? Get involved with the winter supply drive and the #SEACampOut project.

Unless expressly stated, Dispatches do not necessarily reflect the views of Seattle DSA as an organization or its leadership. This post was edited by the Seattle DSA communications team.

2 comments on “Seattle sweeps away its vets: Getting to know the unhoused residents of Beacon Hill”