Last Wednesday, a man named Gator lost just about everything.

Gator was the longest-tenured resident of an encampment on Marginal Way. It’s gone now, taken apart with hands and a backhoe by a city whose only solution to the problem of houselessness is no solution at all. Gator moved here last year to help his brother out while he was undergoing cancer treatment; in the process, they were both evicted. Out of options, Gator pitched camp on the strip of gravel across from the U.S. Coast Guard’s truck port.

More reports from sweeps: How Seattle’s homeless sweeps do more harm than good 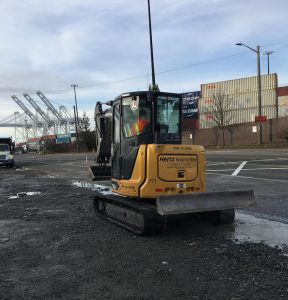 Lives are swept away with a backhoe.

He’s due for back surgery on the 21st of this month, and now he has no idea where he’ll recuperate from that procedure. In the meantime, he can’t pick up his SSI check because his bank account was closed a few weeks ago. Most of his possessions are gone, too: the city can only take so much into storage for each person.

Gator’s life was sorted into piles: things to trash and things to keep. The “to keep” pile was broken down further: things he could carry and things he could not. And Gator was far from the only person to have his life so itemized and cast aside on Seattle’s streets this month.

On Wednesday, December 6, the “U-Camp” encampment near Christie Park was swept by the City of Seattle. The camp had existed for just over a month at the time of the sweep, formed in the days after the City Hall campout and die-in from Nov. 1 -2.

The residents of the encampment asked their volunteer coalition for help resisting the sweep through legal and bureaucratic means rather than through direct protest action. These talks stalled, and the city proceeded with the sweep. Part of the rationale given to at least one coalition member in the weeks prior to the sweep was that the camp was being run and occupied by activists and protesters. The city also cited neighbor complaints and visible trash. They took no chances: at least 13 police vehicles, including two transport vans, were on-site the morning of the sweep, and approximately 25 officers were present. 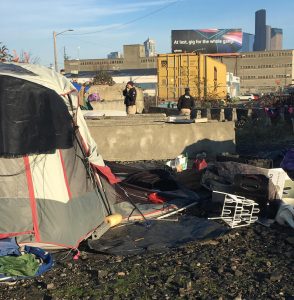 A look at the encampment with SPD officers in the background.

The “activists” that apparently warranted such heavy police presence at the U-Camp sweep ended up spending the day of the eviction helping residents pack up, bag and haul away garbage, and take down the kitchen, food storage, and security infrastructure the residents had erected in their five weeks on-site. It’s almost as though “visible trash” was inevitable when all the nearby dumpsters were locked, the neighbors were hostile, and there were no attempts at garbage pickup by a city government that had known of the encampment’s existence since the day it was set up.

Volunteers were later informed by a resident that the head of the city’s Navigation Team, Sergeant Zerr, had come in plain clothes to one of the new sites where residents were moving on the day prior to the sweep. He did not announce himself as a law enforcement officer, instead adopting a friendly, neighborly tone to pump residents for information about the plans for the site—how many new residents were coming, who it was being “run” by, and other information.

Sergeant Zerr and the majority of his fellow officers arrived on the day of the sweep—a gentle term for a brutal and dehumanizing event if ever there was one—donning the “Blue Lives Matter”/”Thin Blue Line” version of the American flag on their uniforms.  This flag was created to perpetuate the falsehood that it is more dangerous to be an American police officer than to be a resident of the cities they terrorize. That Seattle sends out officers donning it to force its most vulnerable residents into ever-more dehumanizing and dangerous conditions is as clear a statement of intent as we’ll get from our “progressive” government.

Despite SPD’s expectations (and, one must assume, hopes), the sweep went off without a hitch; unhoused residents were shuffled along to the next place where they’ll wait for eviction. 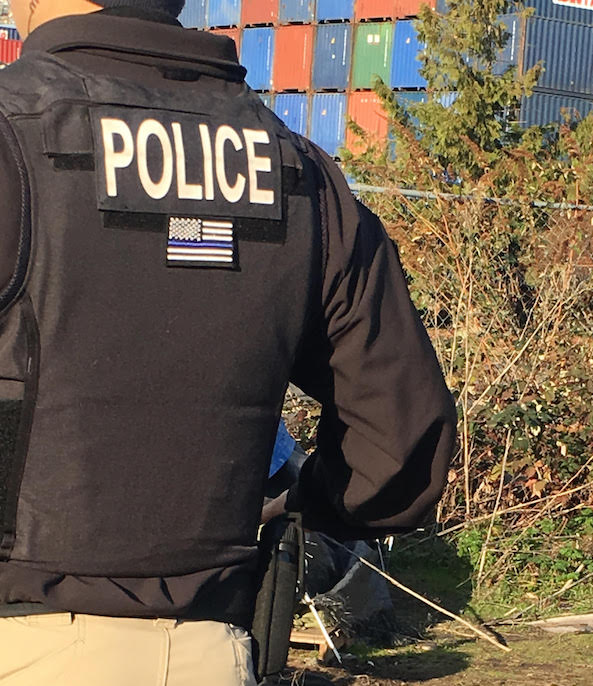 A “Blue Lives Matters” patch on the back of an officer’s jacket.

According to the city, only two sweeps were planned for the morning of December 13—the encampments on Marginal Way and Airport Way.

However, a third sweep took place at an encampment on Harbor Island, where residents had received no notice, instead of the 72 hours required by law. No resident had any contact with the city’s navigation team, which is also required by law.

The rationale given to the residents and the activists who showed up to advocate for them was that, as an encampment primarily made up of RVs, it was under the jurisdiction of parking enforcement, which negated all the preconditions that are supposed to be met before a sweep is conducted. This kind of legal loophole that allows for the targeting of unsheltered, unhoused folks living in vehicles was precisely what councilmember Mike O’Brien attempted to close in his proposed legislation this summer—a bill that ultimately failed. 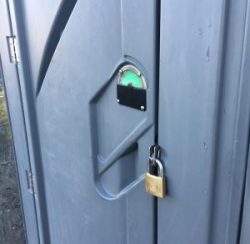 A previous attempt to sweep an RV encampment in Beacon Hill was shut down by activists earlier this year, but it’s clear the city is still taking full advantage of the legal gray area surrounding those who live in vehicles.

More reports from sweeps: Getting to know the unhoused residents of Beacon Hill

On Airport Way, a resident who’d been living there for 16 years was swept away. How many people complaining about the presence of homelessness on Seattle streets have lived here a fraction as long?

Meanwhile, residents awoke at Marginal Way to discover that a portable toilet they’d previously been able to access was now padlocked. It’s these petty little touches of cruelty that make every statement about “solutions” by the city and by SPD laughable—this isn’t passive neglect, this is active repression of a population already living on a razor’s edge. Officers were so busy conducting the other two sweeps that they were nearly 90 minutes late to this one.

Items unaccounted for were scraped up via backhoe as residents were hurried along to whatever and wherever comes next. For most of them, this means another encampment; sooner or later they’ll be staring down the barrel of another sweep.

2 comments on ““Things to trash and things to keep”: Lives divided by continued sweeps”