Pictured above: A ten-foot razor-lined fence that keeps people without shelter exposed to the elements

Capitalism is a system that enriches the tiniest sliver of humanity by deepening the misery of everyone else through exploitation, bullying, and war – but that doesn’t mean the masses don’t fight back. This week we have an update on Seattle’s two steps backward, one step forward approach to hostile architecture. We look into the Uber case against Seattle and app-drivers fighting to unionize. We’ve got stories of solidarity in action from union wins in Germany and the U.S., and updates on the bus driver strike right here in Seattle. We even have a parade! I.E. a ham-fisted example of US militarism at home. Welcome to the Hellhole.

If you’ve ever wondered why benches keep getting more segmented and uncomfortable, then you know hostile architecture. It’s the design philosophy that uses rails, pits, spikes, and obtuse bulges to dissuade folks from getting too comfortable and sleeping or seeking shelter in an area. Remember when Seattle Department of Transportation spent nearly $7000 to install bike racks under the viaduct just to dissuade unhoused Seattleites from setting up camp somewhere dry? This week, SDOT has apparently changed its mind on the usefulness of this strategy for “lessening the hazards of unsheltered living” and will instead remove the bike racks and re-install them in a place where cyclists will actually use them.

The uproar upon the racks’ installation was immediate, as cyclists and observers noted their only purpose was to make camping impossible. However, the unhoused in Seattle never really get a moment’s rest, and the newest assault is less than subtle. Ten-foot, razor-spiked fences under bridges and overpasses have been installed to make the message clear: Seattle would rather spend thousands of dollars on further marginalizing an already-marginalized community than put that money toward programs which would actually help get roofs over our neighbors’ heads. Once again the perceived condition of the city is more important than the living condition of its residents.

Socialists envision a different world, one in which housing is rightly acknowledged as a human right and no one is forced to sleep in the cold and rain. Even better, we’re working to make this world a reality, and you can be part of the solution.

Solidarity In the Works

Since the 1970s, the goal of corporate power in the U.S. has been to atomize, weaken, and divorce workers from one another and the strength that they have together. Never has this been more evident than in the vampiric app-based driver industry, where Uber, Lyft, and the US Chamber of Commerce have teamed up to go after Seattle’s recent law giving app-based drivers the right to unionize. By using the gaping loophole in U.S. labor law that somehow allows Uber to call their workers independent contractors, app companies have avoided any responsibility to their workers. This allows them to continually lower wages, forcing drivers of all stripes into ddesperate straits while setting a new low bar other employers see fit to follow.

This week, the corporate lawyers and the city made their case before the federal bench. Regardless of the outcome of this trial, the case is definitely “headed to the Supreme Court,” where it faces long odds in a 5-4 corporate court made toxic by the inclusion of Neil Gorsuch (who infamously decided a man’s life is less important than his duty to corporate property). There’s a reason that corporations are racing to stack the deck against workers in the courts and legislatures of America – and that reason is …

This week, powerful German union IG Metall made headlines by winning a contract for nearly one million workers that guaranteed a raise, bonuses, and the right to work a 28 hour work week. At the same time, General Motors announced that UAW workers in the United States would be receiving $11,750 profit-sharing checks. More proof that solidarity and a union contract will always give workers a better deal than any amount of corporate benevolence – beating out, by an order of magnitude, the $1000 bonuses touted by the trillion-dollar recipients of the Trump tax cut. Which is why it’s so important to stand united with all workers fighting for justice on the job like Seattle’s local bus drivers.

City bus contractor, First Student, was forced back to the negotiating table!

On Wednesday afternoon, after students left for their regularly-scheduled early release, teachers joined Teamsters on the picket lines and across the city in solidarity with the strikers. Both Teamsters Local 174 and City Councilmember Kshama Sawant have called on Seattle Public Schools to follow through on its earlier promise to seek damages against First Student, which might hopefully lead them to reconsider how much they’re really saving by refusing to provide decent benefits to their drivers. 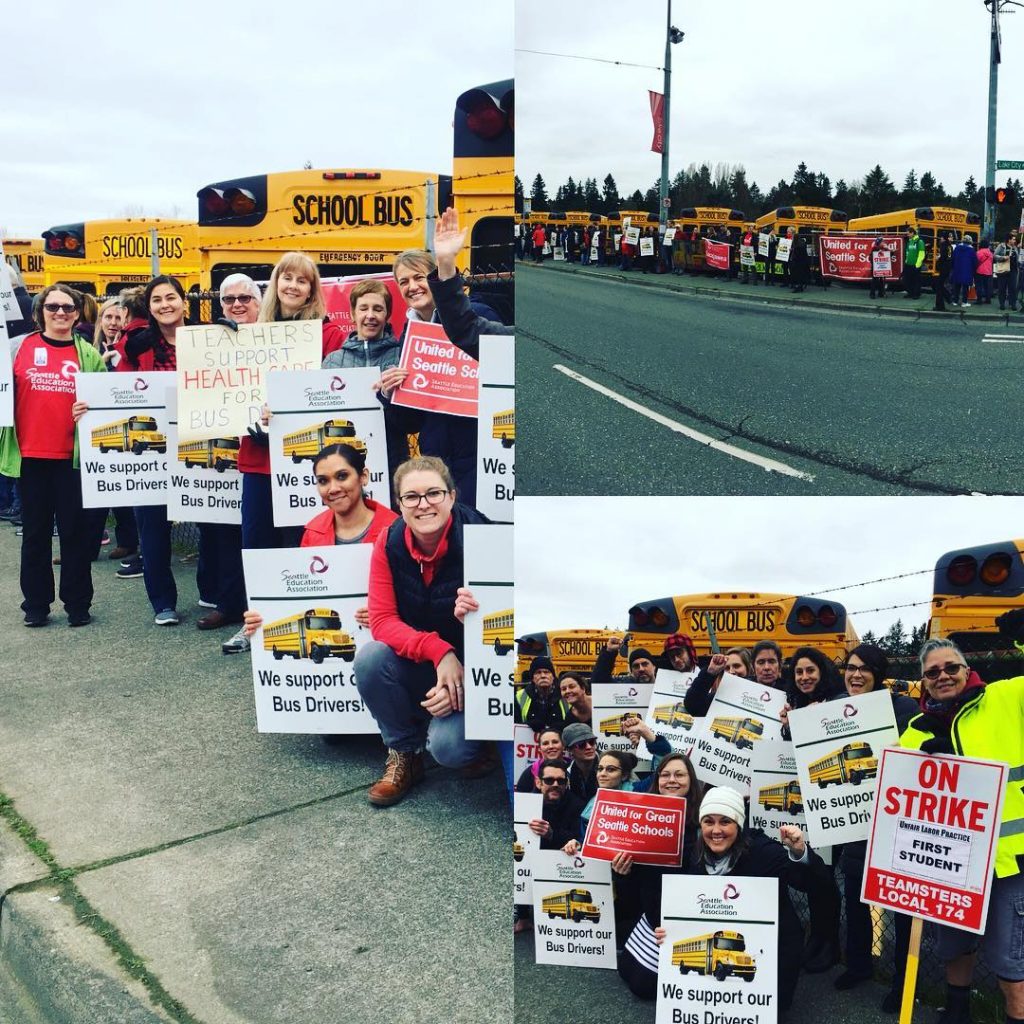 If you’d like to learn from the teachers and support the picket lines yourself, you can head to the Lake City or South Park bus barns any weekday until the strike is over. Make sure to bring some coffee and snacks if you do!

You can also thank the Seattle Education Association by supporting them at their rally against Green Dot Charter Schools, next Thursday February 15. Watch this space next week to hear more about that rally and just why we think that privately-owned, union-busting companies grifting public funds at students’ and teachers’ expense is, in fact, bad.

Welcome to the Flak Parade

Is the annual Blue Angels reign of acoustical terror insufficient to quench your desire for displays of martial might? Then perhaps you’ll be excited to learn, as reported by NPR this week, that our commander-in-chief with the nuclear button is planning a parade.

Trump’s plan is to up the tough-guy ante by rolling trillion-dollar weaponry down Pennsylvania Avenue and past a hotel with his name on it. The same day as that announcement, the Senate reached a bipartisan budget deal that adds a fresh $165 billion increase to military spending on top of the already-gigantic $700 billion defense spending bill passed last September. The combined news of the parade and Defense Department windfall pulled back the curtain on the intersection between the military industrial complex, far-right posturing, and the never-ending need for the continued escalation of death and destruction abroad for the sake of profit at home. A better world is possible, and DSA members have organized a caucus to fight militarism in all its forms. Join the fight for peace.