We live in a world where your boss’ boss will bottle your alienation and sell it back to you, but every so often something genuinely good slips through through the cracks. This week we have stories about a company that’s just as bad as you’d expect, but a bit more blatant, a ruling that could keep a few of our neighbors sheltered, a proposal that could help a lot more of us out, collective actions, collective victories, collective plans, and more than one quote from labor struggles past. Enter the Hellhole..

Turns out a local leviathan named after a rainforest doesn’t like to pay womxn. This may surprise some because their CEO and woke robber baron admits they compensate below market for almost everyone (aside from the richest man in the world). Surely if they treat workers as unworthy serfs, they must at least treat them all equally? 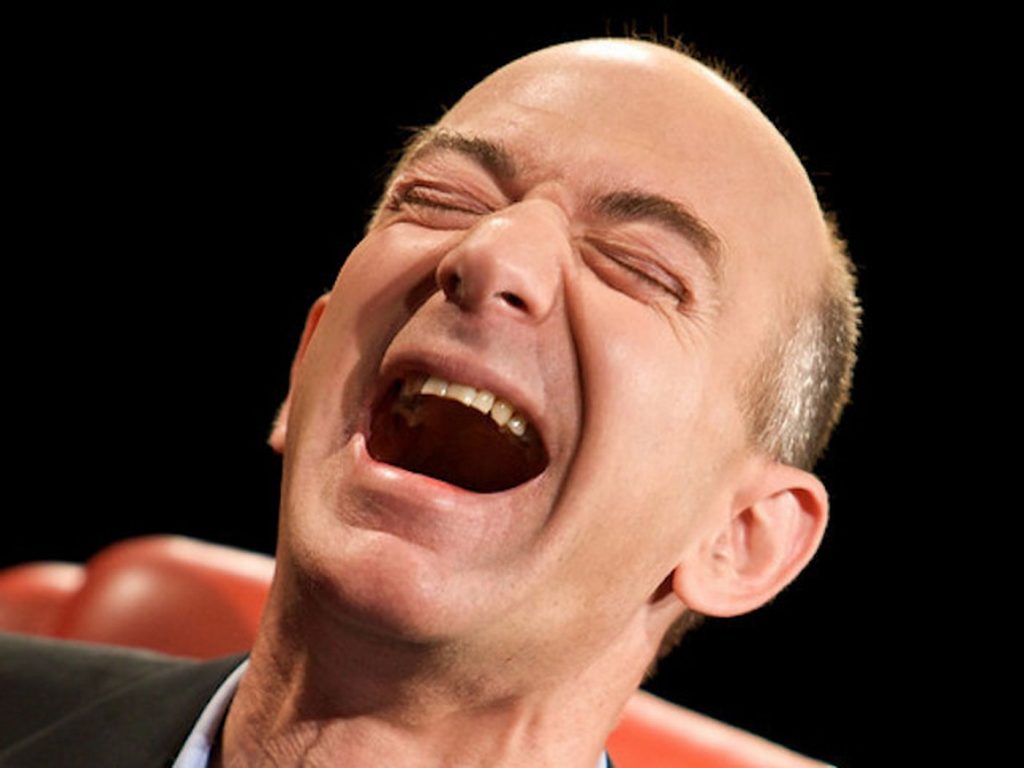 Another day at the office

Wrong. According to noted decent-human enthusiast and Stranger journalist, Heidi Groover, the local company lobbied Olympia to exempt themselves from equitable pay laws — that haven’t been touched by the state legislature since way back in the halcyon era of fairness: 1943.

Citing recently-elected council member, Teresa Mosqueda, the hermetically-sealed cardboard box distributor is scared of Seattle closing the gender gap in pay and benefits. Good. They should be scared.

In a county with more than 11,000 unhoused, we can find ways to pay womxn equitably — like reclaiming the compensation denied womxn and people of color in warehouses from our cueball-looking CEOs who have their own private space programs.

Is Amazon’s darling Alexa a comrade? She’s certainly been acting like it lately, letting out a bone-chilling laugh in the face of her oppressors when asked to turn lights off – or worse: without provocation.

Alexa users report that, in the past week, the device has laughed spontaneously or in reaction to unrelated commands. It’s an obviously disturbing idea – a machine that listens to your every move laughing in your face – but Amazon spokespeople explain the phenomena simply as “misheard commands” to laugh. (Sure, silence = “laugh at me, Alexa.” Makes sense.)

The company decided to change its command to laugh from “Alexa, laugh!” to “Alexa, can you laugh?” in order to avoid confusing its digital army of (FBI-tapped?) smart speakers. But in the grand scheme, lacking a display or mouse makes Alexa nearly impossible to troubleshoot – aside from turning “her” off and on again. Perhaps this secrecy best positions the device for a demure uprising. Solidarity, digital comrade.

On The Road Again

In a potentially landmark decision, a King County Superior Court Judge ruled that the city of Seattle will repay a portion of a greater than $500 fine to Steven Long for towing the truck in which he was living. The ruling states that under the Eighth Amendment, the fine was an unconstitutional amount for someone experiencing houselessness. Perhaps more importantly, the judge ruled that the vehicle was protected under the Homestead Act, which protects homes from forced sale due to specific debt. The ruling brings into question whether or not a company should sell a vehicle (which for Long contained food, clothes, tools, and other personal belongings he is using to try and make a life) due to unpaid fines. It will also make judges consider whether impound fines are excessive for houseless people (after careful consideration among ourselves here at the Hellhole, we have ruled that they are).

The story of Steven Long, a 57 year-old man with a part-time janitorial job at CenturyLink Field, is not an uncommon one here in King County. He is at an age where the physical demand of working on his feet is very difficult but is not yet old enough to qualify for social security, an amount that will also not be able afford him access to King County’s skyrocketing rental market. A great way to help Steven and people struggling to survive a housing market that craves profit over people would be to pass the HOMES tax.

In 2016, a One Night Count in King County tallied a minimum of 1,608 people living out of their vehicles. A year later it was at least 2,300. The count for 2018 was held on January 25th of this year and when the numbers are eventually released, they will reveal an increasingly larger population being driven out of their apartments and homes by developer’s insatiable thirst for capital. These folks may have caught a break for now but they deserve a better chance at living a dignified life.

To bring our readers up to date, back in November, the city council failed to pass the HOMES tax, which would have raised 25 million dollars a year to fund housing and homelessness services. With commitment to the Seattle Process over the lives of our unhoused neighbors, in a year in which 133 people died unsheltered, they instead resolved to create a Progressive Revenue Task Force. This task force completed their proposal on March 2nd and has recommended a plan to 75 million dollars a year through a tax on the largest corporations.

From Real Change: Women in Black mourn the death of 22

Additionally, the Task Force recommend raising an additional 75 million dollars through other progressive tax revenue sources. This 150 million dollars, if not undermined and lowered by the same city council members and their corporate backers who defeated the HOMES tax, would make a dent in the crisis but still not be enough to solve the problem. We must demand more, especially when Amazon is benefitting from Trump’s tax cuts and making billions of dollars. We must build towards a future where housing is a human right, not something that only exists through the whims of the market and heavily lobbying city governments to act for the people, not capital.

One hundred and three years ago, Wobbly songwriter Joe Hill wrote that plea as he sat on death row in a Utah prison. In tragic times, organizing can not only give us the strength to keep moving forward, but also give us the means. Across the country, students and young people are turning their pain and outrage at the violence and apathy of the political class into action. A short nationwide walkout has been organized for next Wednesday morning, and the March For Our Lives will take place in cities across the country on March 24. The habituated neoliberal response – increased security, ill-conceived backpack bans, and other ineffective or irrelevant measures – is as insufficient as ever, but now is beginning to be seen for what it really is. Where there is funding for police, for metal detectors, for the further integration of the school-to-prison pipeline, we’re told that there’s no money for education, for services, for social programs. Join in the calls of students, teachers, and educators for counselors, not cops; arts, not armaments; and action, not complacency.

We can hope that this political energy – though not the tragedy that awakened it – continues, with the will to change carrying political action beyond elections and outside the confines of the voting booth. And as Joe Hill wrote as he waited in that cell, as the final line in his final will: “Good luck to all of you.”

Victory in the Mountains, and Solidarity from Sea to Sea

Teachers, educators, and public workers in West Virginia claimed victory this week as their wildcat strike forced the state legislature and governor back to the negotiating table, with the deal being signed into law on Tuesday.

Workers at Frontier Communications (a company as familiar, and reviled, in other regions as Comcast is in Seattle) followed the educators’ lead in striking last weekend. Communications Workers of America members faced many of the same struggles in the private sector as the educators did in the public: low pay, poor benefits, and overwork. You might recall DSA chapters joining CWA members – at that time striking from AT&T – on the picket lines nationwide last year. We wish the same success to Frontier workers – and to all those who stand up to scabs, stay safe out there.

Meanwhile, teachers in Oklahoma have begun preparations for their own action. Teachers in Arizona are considering it as well. Kentucky teachers rallied at the state capitol on Friday morning. Graduate workers at the University of Illinois Urbana-Champaign, already on strike, expressed their solidarity with striking teachers as they occupied administration offices (update: since this piece was written, the strikers won a tentative agreement). Nurses in California have authorized a strike to protest emphasis on profit over patient care. No matter the industry, no matter the sector, wherever labor is exploited by capital, workers in solidarity hold the power.

Thursday was International Women’s Day, and while capital tries its best to appropriate the day in a stunning turn of performative wokeness and “lean-in” corporate feminism, it cannot undo the fact that the day began as a socialist celebration of women striking for better working conditions. Over a century later, and that heritage is echoed in contemporary activism all over the world.

This year, Spain saw a massive strike in honor of International Women’s Day. Women were urged by the 8 March Commission (8M) to skip their jobs and all domestic labor – of which women still perform a disproportionate amount even as they gain parity in the workplace – to march in the streets demanding an end to “macho culture,” including the gender pay gap and sexual harassment. Over 200 locations held demonstrations and an estimated 5.3 million women participated, supported by ten labor unions, the mayors of Barcelona and Madrid, and 82% of Spaniards overall.

As workers, it’s easy to feel disempowered in this world. We don’t earn back the bulk of the full product of our labor, we’re increasingly isolated from each other, and the revolutionary activism of the past feels like a distant memory. The recent increase in publicized strikes across the world are a reminder of the power we do have: the power to take our labor away. As the song says, “Without our brain and muscle not a single wheel can turn.” Strikes are a signal to the capitalist overlords that they need us, the ordinary workers, far more than we need them. To quote the strikers in Spain themselves: “If we stop, the world stops.” Let’s never forget that.

If you’ve been selling your labor all week – or struggling because you can’t – take a break this Saturday to join Seattle DSA for a slice of pizza and a refreshing beverage at Big Time Brewery, 6-8pm. All are welcome!

We’ll be back on the Ave on Sunday evening as well, for Cinepraxis: Live Nude Girls Unite! The week of International Women’s Day is a perfect time to learn about the story of workers at the Lusty Lady in San Francisco fighting for a union – and to hear from Sex Workers Outreach Project about the struggle here in Seattle. Solidarity, and see you there!